Can Measurement of Subjective Well-Being Help Us to Assess Whether Life is Getting Better? - Winton Bates 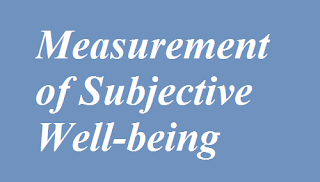 The British government has recently taken some steps toward measurement of subjective well-being in the hope that this will provide ‘a general picture of whether life is improving’ and eventually ‘lead to government policy that is more focused not just on the bottom line, but on all those things that make life worthwhile’.

The quoted words are from David Cameron, the British prime minister. I find it interesting that he refers to ‘the bottom line’ as though the bottom line in British politics has always had a pound sign in front of it. Philip Booth, editor of the recent Institute of Economic Affairs (IEA) publication ‘… and the Pursuit of Happiness’ suggests that the prime minister was attacking a ‘straw man’; the British government has always had a multitude of objectives.

However, I can’t claim to know what the British prime minister has in mind. Initial survey work by the Office of National Statistics (ONS) has focused on a comparison of different measures of subjective well-being. Some of the results are interesting. For example, there is a fairly high level of correlation (0.66) between responses to a standard life satisfaction question (How satisfied are you with your life nowadays?) and a eudemonic question (Overall, to what extent do you think the things you do in your life are worthwhile?).Yet, that kind of information will not tell us much about whether life is getting better. As Paul Ormerod demonstrates in his chapter of the IEA publication, levels of life satisfaction in high income countries tend to fluctuate over time without any obvious trend – and despite improvements in many different well-being indicators. I think the metaphor of a ladder attached to a helicopter, which I used in a recent post, is helpful to an understanding of why successive snapshots of life satisfaction cannot measure progress. If I am climbing a ladder that is attached to a helicopter, my height above the ground depends on the height of the helicopter as well as on which rung of the ladder I have reached. The ladder represents the benchmark of possibilities against which I assess my life satisfaction, but upward movement of the helicopter (i.e. expanding possibilities) may be my main source of progress.

In my view, if you want to know whether people feel that their lives are improving you need to provide them with an appropriate benchmark against which to make that comparison. The ONS survey enables this by also asking respondents to rate their life satisfaction a year ago and five years ago. The scores for life satisfaction five years ago and one year ago were slightly lower than those for current life satisfaction. This suggests, somewhat surprisingly, that Brits generally feel that their lives are still improving despite the global financial crisis and its aftermath. That kind of information seems to me to be worth having.

Unfortunately, I couldn’t find any discussion in the IEA publication of what measures of progress would be superior to the successive snapshots of life satisfaction that are targeted for criticism by several of the authors. The publication certainly serves a useful purpose in bringing together the contributions of a range of authors who question false assertions that have been made on the basis of happiness research and caution against government attempts to use the findings of happiness research to introduce policies to promote happiness. Nevertheless, I was slightly disappointed that the editor did not show a little more sympathy for the idea that there could be some merit in the aim of the British prime minister to obtain a better picture of whether life is improving in that country.

I expect that if government policies were focused more clearly at expanding the opportunities that make life worthwhile, there would actually be less government regulation in most countries, including the UK.

This article has been written by Winton Bates on His blog Freedom and Flourishing.