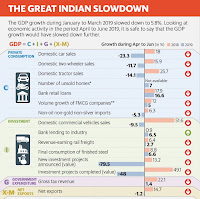 The slowdown in Indian economy started knocking on Indian doors by the end of 2015 (Upadhyay, 2015) and it crept into unnoticed. Even the government, RBI, most of the economists and industry leaders are taken by surprise that were optimistic just a few months back (PTI, 2018). Even the global consumer confidence in India was on peak with Consumer Confidence Index score of 133 (Whye, 2019). As per news reports, about 200 manufacturing companies were eager to relocate its production bases from China to India (ET, 2019). However, in 2014 Raghuram Rajan expressed the possibility of financial meltdown in coming years (Schuman, 2014).

Since 2015, various lead indicators, including the business cycle and the financial cycle, have started pointing towards a possible slowdown in Indian economy but those signs were too weak and the whole economic environment was full with optimism. Though, today the signs of slowdown are strong and more visible. Many indicators like consumption (demand), private investment, number of new projects and GDP growth rate (6.8% in 2018-19) are slowing down (Kaul, 2019). Different institutions like Moody’s and economists are cutting India’s projected GDP growth rate (Dhasmana, 2019). However this downturn is expected to be a short term phenomenon.

The problem of NBFCs that started with ILFS has engulfed the entire economy. It has now turned into a liquidity problem for the whole economy. It has increased the intensity of problems that the struggling banking sector was facing because of increasing bad loans. Because of the tremendous pressure arising due to default by many companies, the banking sector’s ability to lending was already at very low level.

Also there has been significant reduction in private investment and new projects by companies for some time. Because of this too fewer new jobs have been created than expected. On the other hand, considering the macro economic realities, Reserve Bank has cut the repo rate but not all the banks are giving its benefits to the consumers. It too is having a direct impact on consumption. The RBI will have to ensure that consumers get the benefit of this cut so that demand in the economy can increase.

The auto sector is also going through a short-term recession. The demand for vehicles is decreasing month after month. As a result of this, either the workers are getting laid off or the companies have suspended the production for some time. This has created problems for the whole auto industry and the workers. However, it is believed that the main reason for this slowdown in the auto sector is BS-IV and insurance regulations. Due to technical problems, most of the auto companies are calling back their BS-IV vehicles frequently. It has created a lot of confusion in the minds of buyers which is leading to lack of confidence. At the same time on the other hand IRDA has made it mandatory for every vehicle buyer to buy third party insurance for 5 years. This provision has increased the effective on-road ownership costs of vehicles. These two significant developments in the industry have effectively reduced the demand for vehicles.

On the other hand, the level of retail inflation in the economy is very low compared to previous periods with relatively high unemployment rate. This situation is not beneficial for the economy at all. Coupled with these some budget provisions such as angel tax on start-ups and increased capital surcharge on capital gains and foreign portfolio investors have served to discourage the stock market which is already worried due to trade war between the USA and China. Though, these have now been withdrawn, but have already caused huge losses to the stock market. Because of budget provisions the foreign portfolio investors were losing faith which now seems to be addressed. And the kind of response has been from the government, it seems economy is now the focus for the government.

It's evident from the data that GDP growth is slowing down. But economy is not contracting. Rather it is growing at slower rate than earlier growth. It is a short term problem but a natural recovery wouldn't be possible at all considering different indicators. Rather it requires policy level response and any leniency would start recessionary cycle. However the situation at economic front is not pleasant but there is no need for the Indian economy to panic. Rather it needs to stay calm and take some right policy level decision at monetary as well as fiscal level.

There is enough space available to policy adjustment without putting too much pressure on fiscal front. Also the government must ensure that in the process of economic transformation it would avoid knee-jerk decisions as well as completely unexpected actions. Such decisions without enough preparation and backup have negative impact on sentiments in the economy. Due to the efforts of economic transformation by the government, there are some structural changes which are underway. These require adequate and effective policy response and support however it has not been made available in time but the government is taking affirmative actions in the right direction to address the issues economy is facing today (HT, 2019).

As far as possible recessionary signs in economy are concerned, the governments and regulatory bodies may do whatever they wish to but there will be a period of recession every decade. It is a by-product of global economic and financial integration and complex financial structures and products. This integration has opened many doors of opportunities and international trades to India but has also increased the risk in the entire economy (Upadhyay, 2014).

Download this article in pdf: Slowdown Creeps in Indian Economy