Everyday there are a report about the suicide of farmers in the country. And most of the farmers who attempt suicide are found to be growing cash crop like cotton, sugarcane and jute. This has left so many unanswered questions about the reasons behind these suicides. However there is hardly any doubt about the distress in the Indian farm sector. There is a broad consensus about the same among the economists as well as the Indian administration (Iyer, 2018).

Moreover, agriculture still remains the largest employer as a sector in India. The World Bank data suggests that more than 50% of Indian families are dependent on agriculture for their livelihood (Upadhyay, 2014). This figure is self-exploratory as how important is agriculture sector for India even if the share of agriculture in GDP has significant gone down over time. The governments (centre and state) have been floating a number of schemes and initiatives such as infusion of liquidity through Kisan Credit Card, different types of subsidies, direct transfers and farm loan waiver, etc. to address the farm sector distress but it seems there is no significant improvement as the incident of suicide are not stopping.

Many studies are there on this issue and these studies find a number of reasons for the farm sector distress in India. Some of the most important factors for the distress in farm sector are high risk in agriculture sector because of unpredictable weather, low income from agriculture produce and lack of agriculture infrastructure (Joshi, 2018). And considering the breadth and depth of agriculture sector in India along with small land holding patterns, it is almost impossible for the governments (centre and state) to come up with a viable solution and implement. In this CSR and societal may prove vital but with some caveat.

In an era where globalization is well accepted concept for mutual growth and development (Upadhyay, 2015), the initiatives by the governments are bound attract international attention and as a result there has been criticism to Indian efforts calling these to excessive at international platforms such as WTO and other World Bank etc. (Upadhyay, 2019). On the other hand United Nations Development Programme (UNDP) is promoting its Sustainable Development Goals and advocating for zero hunger through sustainable growth in agriculture (UNDP, 2019). There is international as well as domestic (government and non-government) support to agriculture but things are not moving in comfort zone. This poses a number of questions as why agriculture sector is not reviving. For answer to this particular question, we have to look back into the history. 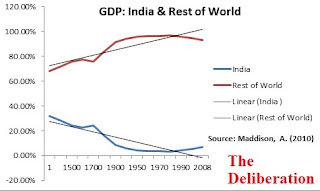 There was a time when agriculture had highest contribution to GDP in India (Naoroji, 1901) though the world economy was predominantly agrarian and India had very high contribution to world GDP (Maddison, 2010). Also there was a time when agriculture was considered to be the most prestigious profession in India. But the fate of agriculture started changing with the knock of invaders and mainly British Rule on Indian doors. For its own benefits, British Imperialist Government simply destroyed the whole economic as well agriculture system of India. They first destroyed all types of craftsmen so the handicraft and domestic industry with the help of very high level of taxes to support the Industrial Revolution in Britain (Maddison, 1971). The high level of taxes on handicraft made handicrafts unattractive for Indian customers. This resulted into unemployment of large number of craftsmen. It didn’t stop here only. Rather the British administration used this as an opportunity to make profit by buying these handicrafts at cheaper prices and trading at higher prices outside India. This turned into a new tool of exploitation in India and provided much needed capital for sustaining Industrial Revolution in Britain in particular.

The Industrial revolution not only needed huge investments but also needed market and raw material. Indian market was capable of making available both the raw materials as well as possible customers because of the peril cause of high taxes on handicrafts. The imperialist government for the making raw material available to British producers forced cash crops like indigo, opium, cotton and jute on Indian farmers first in Bengal then across India (Deshpande, 2009). It suited the needs of Industrial Revolution. This completely changed the nature, dynamics and habits of Indian agriculture sector. The economics of agriculture was dependent on mutual benefits and inter-dependence on other farming communities and craftsmen. This inter-dependence created opportunities for trade among the farmers and craftsmen. Now, this interdependence was not available to huge extent again creating difficulties for farming communities as well as craftsmen. It completely changed the Indian economic system and behaviour forever.
Along with these two changes in whole economic system, British Rule replaced the old administrative system with the new one which required lower workforce than the earlier system (Maddison, 1971). The new system employed lesser number of people and required new set skills than the earlier version. In this process again, large number of people were made unemployed. These three changes altogether had crippling effect on Indian agriculture system in particular and whole economic system in general. Because of these it increased the unemployment to very high level during that time. It was basically de-industrialization of India. So a large number of skilled craftsmen were now available and unemployed and were unskilled for any other sector. 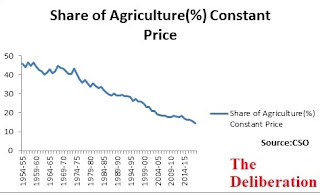 Eventually these three basic changes along with many gradual changes increased the pressure on agriculture as unemployed artisans had no options but had to be absorbed by the agriculture sector their livelihood and employment. Over the time the British system worked on destructing the Indian economic system and as result the India’s share to world GDP came down to around 4% in 1947 AD from more than 22% in 1600 AD when East India Company arrived in India. The misery of Indian agriculture sectors which was started by the British still continue even after 72 years of Independence and the contribution of agriculture in GDP has come down to 14.46% in 2018-19 from around 50% at the time of independence but still half of Indian family are dependent on agriculture for their livelihood.

Download this article in pdf: Devastating Impact of British Rule on Indian Agriculture
at August 02, 2019