Has India done it Right by not Ratifying WTO’s TFA? 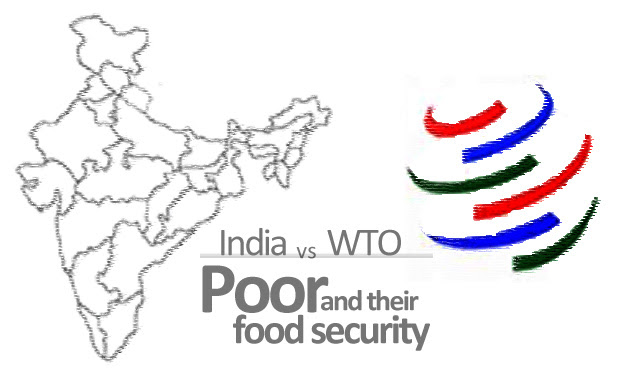 There has been a lot of discussion about the India’s stand regarding the WTO's Trade Facilitation Agreement (TFA) for which developed countries have been lobbying since long (WTO, 2001a). However India has made it very clear that she will not ratify the TFA until and unless there is a concrete proposal to find out a permanent solution to its public food stock-holding issue for food security under Right to Food Act 2013 for ensuring access to enough food to her 1.3 billion population. Before opening the discussion a look at the previous events is necessary.

WTO replaced GATT in 1995 resulting from ‘The Uruguay Round’ with goals of free trade across the world by reducing trade barriers such as tariffs and subsidies mainly in agriculture, manufacturing and services such as banking and insurance, and to establish powerful and effective intellectual property laws (WTO, 1995). Most of these goals were aimed to benefit the whole world but in practical the beneficiaries were developed countries and MNCs at cost of developing countries and the reason for the same can be traced to the structure of the WTO that has been tilted in the favour of the developed countries. For long it has attracted criticism from many groups like Oxfam, Health Gap and Global Trade Watch. So to prove that WTO works towards better world, ‘Doha Round’ negotiations started to complete the remaining trade reforms claiming to have an explicit focus on addressing the needs of developing countries (WTO, 2001b). But again in some ways or others, the interests of the developed countries are dominating with Doha Round trying to convince developing countries to lower subsidies to agriculture and other sectors either through persuasion or pressure. 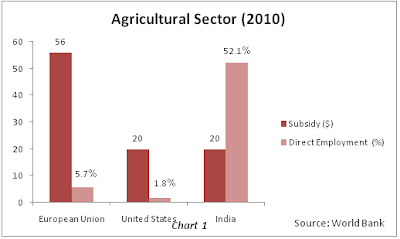 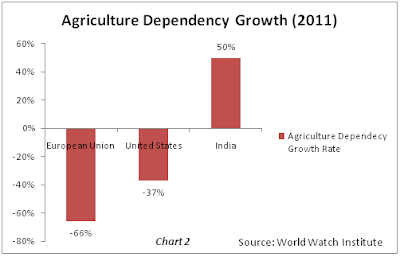 Now discussing the reasons why India did not ratify the TFA even after agreeing to do so in Bali Ministerial Meet. There are around 1.3 billion people that India has to feed and at present it is the most important task in the hands of the government. So Indian Government should do everything that can help to achieve it. Even if she has to take tough stand at WTO negations, it must take. The proposed TFA is completely against the interests of India. The current norms for calculating subsidies limit subsidies at 10% of total value of food grain production and the base year for minimum support price is 1968-69. And any country breaching the limit of 10% would be penalized with hefty penalties. These stated norms look so good but are completely against India’s interests. There is a need for amendment in the norms for calculating subsidies and change in base year to a more recent base year because the economic profile of India has completely changed since 1968-69. Though there are many arguments by many scholars which could be cited as reason for signing the TFA (Meltzer, 2014).

In India, inflation has been relative on higher side in comparison to developed world, the minimum support prices for different agricultural products have been consistently increasing, procurement of food grains has increased significantly because of Right to Food Act and at the same time, Indian Rupee has depreciated at higher rate against the US dollar. These factors and compulsions altogether put India into a very peculiar situation forcing her to take tough stand (The Hindu, 2014).

The first priority of any nation is to feed and provide with a dignified life to its citizens. Considering India’s economic profile, it is clear that it is better for India to protect the interests of its farmers and the poor even at the costs of foregoing possible benefits from TFA than just creating jobs for other countries. More interestingly, the stand taken by India has been supported by International Fund for Agriculture Development, the UN body for development of agriculture. So India’s decision should not be seen against WTO and international trade but in favour of the poor across the world.

As far as NAMA is concerned (WTO), from empirical evidences from many countries and India, it is clear that it is going to hurt India’s interest in short to medium term and nothing can be exactly said about the long term. At present, the bound tariffs for India are on higher side and under the commitment; India has to make steep cuts in its bound tariffs in most of the sectors (mainly textile and clothing) than that of the developed countries. This will create an imbalance in the outcome of NAMA negotiations which would be a disincentive for the manufacturing sector leading weaker domestic manufacturing sector. Already there has been irreversible damage to the MSMEs in the name of globalisation and free trade agreements. Importantly, it is expected that NAMA would further weaken the MSMEs and informal sectors like fisheries, natural rubber and animal husbandry that are vital for inclusive growth and higher employment opportunities that is important to bring down inequality. India can deal with this issue by creating a safety net for sectors that are expected to be adversely affected by lower tariffs.

For any government or economic policy, it is the interest of people and the nation that is of prime importance than any kind of global trades and treaties. So it is natural that even if India’s stand is a setback to WTO and freer global commerce and liberalisation as well as India’s commitments for liberalisation, India must stand tough with her demands not only for the agriculture sector but also for it vital MSMEs sector. Although it is near impossible to reverse some of the commitments on bound tariffs but it can balance bound tariffs using its services sectors like telecom, IT and business services sectors. Also it is suggested that it should stick to its initial negotiating stand that the developing countries should have the flexibility not to bind certain tariff lines still considered domestically sensitive or strategically important. This would not only will be beneficial for India but also for the other developing and least developed countries and India can gain huge diplomatic gains and inroads in these countries.

Bibliography:-
Download this article in pdf: Has India done it Right by not Ratifying WTO’s TFA
at August 25, 2014